ANSİAD Chairman Sadık Badak’s speech on “The Past, Present and Future of Antalya” at the Panel organized by the Chamber of Civil Engineers of Antalya on 14 April 1993 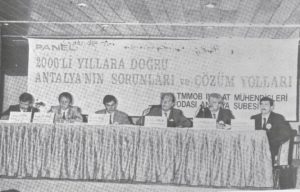 In short, Antalya of yesterday;

In the 1960s, Antalya was a residential area with 30-40 thousand inhabitants. The south of the city was Atatürk Stadium Immigrant Houses (Abdi İpekçi Street) and Officers Houses, and the west was the newly built Gardeny Houses district with two-storey buildings.

A residential area between the sea and the mountains, separated from the Central Anatolia by the Taurus Mountains, is not on the transit road and far from the production and consumption centers such as the Aegean and Marmara. In this beautiful, fertile soil of this green Antalya, industrial plants and oilseeds, summer and winter fruits are grown. However, it is extremely difficult to sell them and turn them into cash capital. Manavgat Serik Antalya means of transportation is inadequate. It was possible to reach Kemer by road, only by jeep or motorcycle and by sea. Until the mid-1970s, the Celtikci waist of the Cubuk Strait in the Taurus Mountains was hardly vaccinated, and goods sent to other regions could be reached in Burdur in 7-8 hours. Some of the great landowners and entrepreneurs were loading and sending agricultural and forest products that could be shipped from the rocks next to Club 29 on the slope of our marina.

The status of our city in those years; land was fertile, sociable people, open to development in front of a town waiting for infrastructure support. As a matter of fact, the state, which wanted to evaluate the sea, sun and history of Antalya as provided for in the 3rd. 5-Year Development Plan and to bring foreign currency to our country, mobilized its facilities especially since 1974 1975.

Antalya-Alanya road route was improved within a plan. Antalya-Kemer Finike road is completed. Demre-Fethiye continues. Korkuteli Fethiye road was built. Antalya Korkuteli road Antalya-Ankara E 24 highway was brought to the standards of the day. Antalya Isparta-Manavgat Konya road to be supplied, our city’s electrical infrastructure, energy centers and transmission lines, drinking water transmission lines and city drinking water network has been completed. PTT centers, communication infrastructure and sea and air passenger ports have become the most modern among the peers of the country.

Within this framework, priority was given to the land and zoning and infrastructure constructions of Kemer-Belek Side-Alanya regions, which are considered as tourism centers. Antalya and Kemer marinas are completed. The ports of Alanya-Finike-Kaş were rehabilitated. Kalkan fishing shelter was finished. On the one hand, while these infrastructure works are ongoing, the construction of tourist hotels and holiday villages was supported. These planned investments provided to our region started to affect from 1986 to 1987, increase the income level and increase the life level in the region and Antalya has reached almost half of the touristic bed capacity in our country. The result was obtained in 1990 in Antalya Turkey about half of the total tourism income. ($ 1.6 billion) However, while all of this was done, first of all, there was no support for manufacturing facilities that would produce goods and materials for the demand of this sector. Spontaneous and disorganized development of self-generated facilities was caused.

Meanwhile, Antalya Port was expanded and turned into a large and modern equipped facility with a capacity of 4 million tons / year. The need for the Organized Industrial Zone was finally acknowledged. In addition, many cities dreamed of the Free Zone has reached.

Our city, especially between 1976 and 1992, experienced a rapid internal migration in parallel with this rapid development. Internal migration of population per year as Antalya Turkey’s population growth rate of 4.2% (2.2%) increase was caused almost doubled. This situation brought new problems in areas such as illegal buildings, slum health, education, urban transportation, water and electricity. Lack of coordination in urban infrastructure constructions of organizations such as PTT, TEK, and Municipality causes these problems to increase from time to time. Today, primarily Antalya-Kemer Manavgat and Alanya municipalities are under the pressure of this internal migration, and they expect legal and financial support from the government. Currently, Antalya is experiencing the pains of urbanization, leaving the appearance of a town of 400,000 people. We think that the legal support can be provided by settling with other cities receiving internal migration. For financial support, I would like to express that it is necessary to double the share of the income and corporate tax obtained from Antalya by taking into consideration the population growth rate. In addition, it should be noted that in case the Antalya Port is privatized, the payment to the municipality from the port services will be a very important income.

Our region is obliged to integrate Agro-Manufacturing and Trade opportunities to other regions as well as tourism. In this way, it is necessary to direct the capital consisting of both tourism and land rents to production in this region to meet the needs of the agriculture and tourism industry, and to present the products to be processed in the country and abroad with high added value. After the Aksu Yarn Factory of Antbirlik, which was opened in 1975, there was no investment for a long period of time. The delay of the Organized Industrial Zone and the statements and explanations that some managers in the past will not allow production facilities in Antalya have shipped potential serious investors with hesitation. The high cost of land and congestion in the Organized Industrial Zone continue to force the medium-sized entrepreneur to invest outside the region. We think that this can be prevented in three stages.

The infrastructure of the Organized Industry should be covered by the general budget and completed by public investment institutions (İller Bank, PTT, TEK, DSİ, etc.), the cost of land should be reduced in this way. A master plan should be prepared from Çakırlar to Gebiz and Karaveliler village of Lara in our city. Production investments in our region should be planned on the basis of the Lakes Region, and our governments and regional managers should focus on the development of the Lakes Region as a whole to ensure the protection of our city.

The legal and actual barriers in the Free Zone are also a problem for the entrepreneur. The lack of port docks of the Free Zone, our country’s lack of railway pillars of such a modern and large port, T.D.İ. policy, resulting in excessive price practices, depriving our city of freight and tourist ships, leading to significant revenue and investment loss. The short-term solution to this problem should be considered as the privatization of port services. The fact that wholesale marketing firms do not have healthy warehouses is another dimension of our city. In recent years, Antalya wholesaler can not supply goods in a comfortable environment Gazipaşa – Alanya Manavgat craftsmen Konya Kork Korkuteli-Elmalı craftsmen have made Denizli prefer.

Kas-Kinik region is already connected to Fethiye, Mugla. Antalya wholesaler companies are trying to overcome this problem by establishing mobile teams. However, the permanent solution for this is to provide PTT, Bank, etc. which can easily enter and exit the ring roads for wholesalers. it is clear that there are large, healthy warehouses with infrastructure services. The current situation adversely affects the insufficient traffic flow of our city. If our city does not exclude wholesaler companies in a few years, the solution of this problem will become very difficult in the 2000s due to the occupation and increase in land prices.

We are living in the environment that prepared by the previous generation. Our children will live in Antalya which we prepared. I wish that the following statements will be evaluated within this framework.

In our opinion, our region needs two investments that will closely and extremely affect the Trade Manufacturing-Tourism and all business fields in the future. One of them is the manufacturing and trade fair. Since we are not a merchant society, we understand the importance of fairs. Germany has made fair trade a separate sector. Every year, receives billions of marks from Hannover, Frankfurt, Düsseldorf and so on exhibitions. Turkey also has its own extent that chance. Our country is between two production and consumption centers like Europe and the rapidly developing Far East. It is inevitable that the trade balances and centers between the rapidly developing China and India and Central Asia and African countries on the way to becoming a consumer society will change within the next 20-30 years. In this geography, Antalya has a high chance with its capacity of 300 thousand beds, clean environment and modern airport that will cater to 5 million passengers per year. If Asian oil flows into the Gulf of Iskenderun, this chance will increase. 500 thousand m2 exhibition in the area of ​​Aksu Gebiz, 50 thousand parking area, large congress centers and international scale and will reach the end of 25-30 years at the end of capacity to be planned today, will bring countless benefits to our region.

Another investment that will be important for our city in the next 20 years is Ankara Antalya High Speed ​​Train. Istanbul-Ankara high-speed train project will be completed in those years. According to the statements, approximately 30 million of our population of 80 million countries in 2010 will live in the circle that includes Istanbul and Ankara. Moreover, this population will then be targeted at the highest stake of $ 5,000 in actual income of $ 9000 per capita statistics. The active part of this population will be composed of the most traveling and consuming people born in 1970s. It should be recognized that 20% of this population will need travel. As a result, 5 – 6 million people from Istanbul – Ankara region can easily reach and rest from 2010, only Gazipaşa – Finike region. It is not possible to transport this number of people by bus or car. This is the fast train that will run our people between Antalya. Families should spend the weekend in Antalya in those years, to do shopping and 2 and a half hours from 5 hours to Ankara to Istanbul with confidence.20 0 need it next year from Turkey and Antalya.

In line with these thoughts, Antalya in the beginning of 2000;

Ring roads, modern bus station has been completed 3 new airports, tourism has reached 300 thousand beds, $ 4 billion tourism income per year, Free Zones filled with modern processing facilities of agricultural and forest products, Satellite Cities on the Yeniköy plateau and Varsak area formed the Wholesalers Sites and Sheeps We are thinking of a city developed in the vicinity of the high-speed train station in the region, full of goods and customers, Olympic sports games arranged, Antalya-Alanya motorway passing through the fairground established in Gebiz region, connected to the motorway in Central Anatolia, warming with natural gas and befitting the people.